Scottish Dress in the 18th Century - A Question of Tartan


If you're anything like me, you've grown somewhat obsessed with the new show "Outlander". What's not to love, really? Badass WWII nurse gets magically transported back to 18thC Scotland where she meets Dashing Highlander and they have adventures. It's fantastic. (Seriously, go watch it.) The costuming on the show is also top-notch. No, it's not totally 100% accurate, but the show does a good job of giving the period look, tailoring it to the Scottish theme, and still appealing to modern audiences without going all Reign all over the place. (Seriously...this is supposed to be Tudor?)

The second half of season one is finally premiering tonight, and I have 10 yards of wool tartan itching to become something Outlander-esque, so I figure it's time to look at what highland women were wearing in the 18thC.

In the show, when Jamie and Claire aren't shagging (and sometimes when they are), they're wearing lots and lots of tartan, like this.

It is everywhere in this show, and everyone wears it, from the laird down to the kitchen staff. And they all wear some sort of bulky, crazy knitwear, from weird little collar things to knit shrugs and mitts. 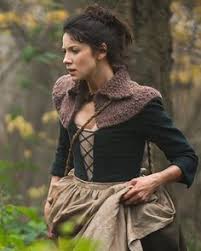 The chunky knitwear certainly helps to give the impression that the landscape, both literally and figuratively, is rough, rugged, and a bit treacherous, and the tartan makes sure you never forget that it's Scotland.

So, did highland women actually wear all that tartan? At first it seemed like the answer was probably no. Scottish women wore pretty much what women in England were wearing, so it would look more like this than what's in the show: 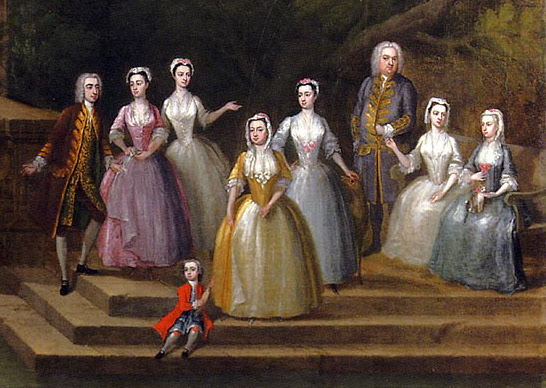 However, then I came across a series of letters from a fellow named Edmund Burt, who was a military officer in Scotland. In 1725-28, he wrote a to his friend in London, which was published as a book later on. Of highland dress, he wrote in his "Letters from a Gentleman in the North of Scotland...":

“The plaid is the undress of the ladies at Inverness and to a genteel woman who adjusts it with a good air, is a becoming veil.  But as I am pretty sure you never saw one of them in England, I shall employ a few words to describe it to you.  It is made of silk or fine worsted, chequered with various lively colours, two breadths wide, and three yards in length;  it is brought over the head, and may hide or discover the face according to the wearer’s fancy or occasion:  it reaches to the waist behind; one corner as low as the ancle on one side; and the other part in folds hangs down from the opposite arm.”

Burt talks about plaids (the veil-type garment itself) and tartans (the actual checkered pattern) quite a bit. It seems that everyone and their dog wore tartan as a way to identify themselves as highlanders. So, that huge amount of tartan we're seeing in Outlander is entirely plausible! As far as pictorial evidence, I've only managed to find one portrait, of a young lady named Helen Murray, in a red tartan dress.


In the 1740s there was an uptick in Scottish nationalism. There was great political unrest, and tartan enjoyed a surge in popularity with those that wished to show their Scottish pride. There are many portraits of Scottish men from the period proudly donning entire suits made of tartan, with the Scottish kilt replacing the usual breeches of the time.

In an attempt to put the Scots back in their place, the King signed the Dress Act of 1746, which expressly forbade the wearing of "highland dress", including tartans and kilts.

That from and after the first day of August, One thousand, seven hundred and forty-six, no man or boy within that part of Britain called Scotland, other than such as shall be employed as Officers and Soldiers in His Majesty's Forces, shall, on any pretext whatever, wear or put on the clothes commonly called Highland clothes (that is to say) the Plaid, Philabeg, or little Kilt, Trowse, Shoulder-belts, or any part whatever of what peculiarly belongs to the Highland Garb; and that no tartan or party-coloured plaid of stuff shall be used for Great Coats or upper coats, and if any such person shall presume after the said first day of August, to wear or put on the aforesaid garment or any part of them, every such person so offending ... For the first offence,shall be liable to be imprisoned for 6 months, and on the second offence, to be transported to any of His Majesty's plantations beyond the seas, there to remain for the space of seven years.

There is, however, no mention of women in the law, and thank goodness for Flora MacDonald, a Scottish Jacobite who wore her tartan loud and proud, even after the Dress Act. Either she was completely ignoring the law and saying a loud "screw you" to the English crown, or she was taking advantage of a loophole and wearing the tartan to show her Scottish loyalty.

Flora MacDonald again, in some crazy paned-sleeve, bow-covered wtf-ery. She seriously loved her some crazy sleeves. Just google "Floral MacDonald" and take a look at the crazy stuff she wears. There's a portrait done by Richard Wilson of her in a black dress covered in pearls that is seriously goth fabulous. I may just have to do a post about her costume insanity.

The law was strictly enforced, and after a while tartan was no longer seen as "highland dress", and the law was finally repealed in 1782. Tartan enjoyed a return to popularity after the law was nixed, and Scottish families almost immediately started incorporating it back into their wardrobes. Detail from A Highland Wedding a Blair Atholl, 1780s, possibly showing the wearing of the tartan veil that Burt described.

So there you are! If you want to go Outlander, you can go mad with your plaid, go wild with your tartan! Make whole gowns out of it, mix and match tartans, go crazy!
- April 04, 2015
Share